I love to cook; to bake; to start with the basics and create a meal or anything edible. I take after my Dad. But as much as I love bread, I never even attempted to buy yeast from the store and go through the steps to fill my living space with the aroma of fresh-baked bread … until I started home care for an Orthodox Jewish patient.

That little packet of yeast was intimidating! Oh, I’d read plenty of instructions on how to make bread dough – the whole process of having just the right temperature to make the yeast without killing it; then kneading the dough, and hoping that after you’ve set it in a warm spot and waited at least one hour, that you actually did it right. I guess if I’d seen Dad do it then I would’ve attempted a trial and error sooner. But the only bread-from-scratch experience I got from him was the sourdough bread. I remember the starter in the refrigerator and the delicious aroma when Dad baked it. 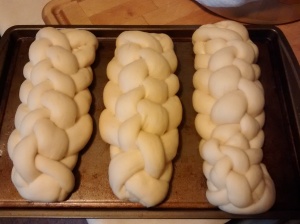 client’s wife. It was her challah that did it – and made me realize that being a vegan was a two-year moment that was now officially over. Not one slice of any commercial bread that I’d ever tasted – with the possible exception of potato bread – ever had a crumb as melt-in-your-mouth soft as her challah. From that point on I was determined to make it myself.

I followed her challah recipe and Googled 4-, 5-, and 6-strand braiding techniques. My 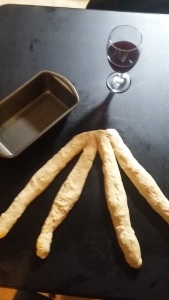 old intimidation of the yeast resurfaced; getting the water the right lukewarm temperature so that the yeast would rise properly took a couple of tries, and I still have batches of dough where I might have been off, but I’ve had a better experience than I ever thought I would.

The preparation of the dough for me is a legal high, without the psychotic aftereffects.  I don’t have a standing mixer, just a hand-held with extra tools including a couple of dough hooks that I use once in awhile. But I prefer kneading by hand. I get the same feeling that I get from exercising or from gardening, crocheting, any activity where my hands and/or total body are busy: a total relaxation of my mind.

So, every month – except during the warm-weather months when I cut way back on any bread products for the sake of my size medium uniform pants – I make three or four loaves and immediately freeze them for when my grandchildren come over.

Homemade pizza that I made from challah dough.

Another tip I got from my client’s wife who freezes most cakes, breads and soups that she makes. That way they’re not in my face, because at times, particularly with this bread, that I tend to forget all about portion control. But my kids come over, and my Nana drive kicks in, it’s a lot easier to use common sense with the challah, and enjoy it without eating too much of it.