Sometimes I have my issues with technology. I worry that it will keep the nation as a whole physically unhealthy – making it too easy to just push a button instead of getting off our butts, even while it’s increasing the ease with which we handle our daily affairs.

This app that I found on Google Play that tracks the amount of water that I drink has been the accountability that I’ve needed. 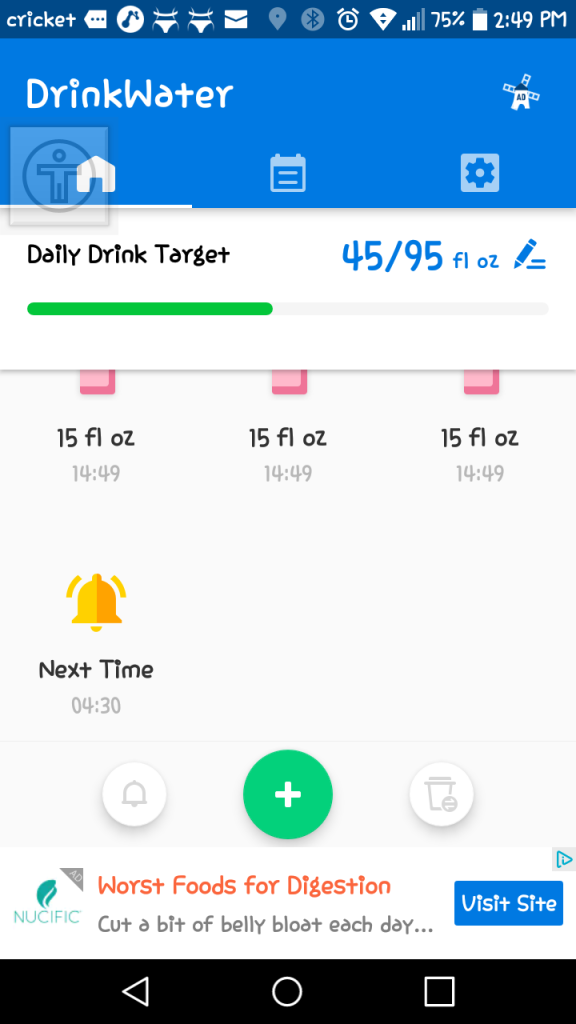 In my 55 years of living, I’ve found out that it’s easy for me to keep one eye closed – sometimes at the most inappropriate times – like when I should be keeping on top of my daily water-drinking habits.

In the past couple of years, I’ve been rushed to the emergency room twice: once because my heart was beating out of control even when I was sitting still; and the second time because after walking from my house to the bus stop –  a 10 minute trek at best – I felt extremely weak and my heartbeats were erratic. Both times I discovered that water, or a lack thereof, contributed to my health problems. The first time, when my heart would begin to race, even while lying still on the gurney, the blood draw concluded that my magnesium level was low. Coffee is dehydrating, and I drink a lot – at the time, not paying attention to how much water I was drinking, particularly if I was stressed. The second time in the emergency room, tests concluded that I was dehydrated.

But even after all that, when I did up my water-drinking, I still had an incidence

sitting in my apartment when I felt so dizzy, I unlocked my apartment door, kept my phone poised to dial 911 and called my daughter to ask her to please check on me within the next couple of hours, fearing that I’d pass out in my apartment by myself.

Clearly, for a person who drinks coffee regularly and champagne or sangria on the weekends (again, both coffee and alcohol are dehydrating), I was STILL not drinking enough water. So, I’m loving this app! 🙂

The app not only tracks how much water you drink, it reminds you when it’s time to drink again, and it’s personalized with your height and weight to gauge how much your daily intake of water should be.

Drinking water should be easy right? Well, it is for me after a gym-level workout. But if I’m not sweating AND it’s cold outside? I need all the reminders I can get. Even with technology’s assistance though, I still need a bit of help at times. Lemons do the trick most times, and so does a sprinkle of ginger powder.

Now I’m not a person who is going to totally depend on technology. I like to let it get me started, and when I form a daily habit, let it go.

But it’s good to know that if I ever need it to get me going again, it’s there. 🙂

One thought on “Water intake-tracking apps? I’ll take that!”